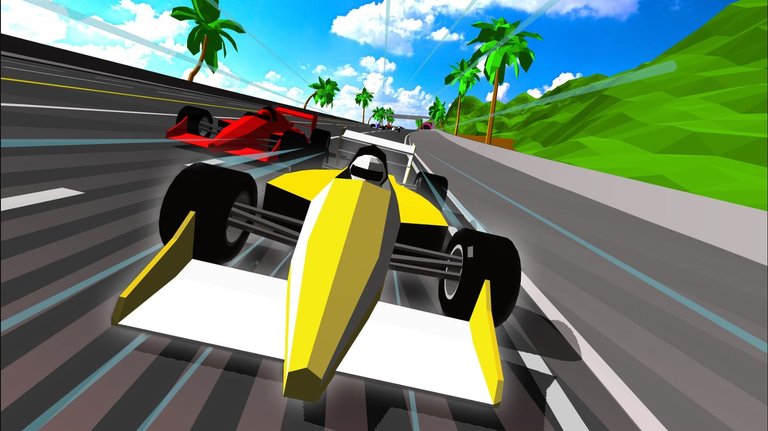 Formula Racing Retro is a racing game in the style of Virtua Racing. There’s no way to avoid mentioning it right away. What you don’t know is Virtua Racing Deluxe was one of my favorite games when I was a kid. I still remember how the announcer would say”Virtua Racing!” It’s crazy for me to think about how much I must have played and obsessed about completing all the tracks over and over. It was one of those games along with the 32X that brought me so much happiness. So there’s no way I could pass up a chance to relive that with Formula Racing Retro.  Let’s take a lap and feel out the game. 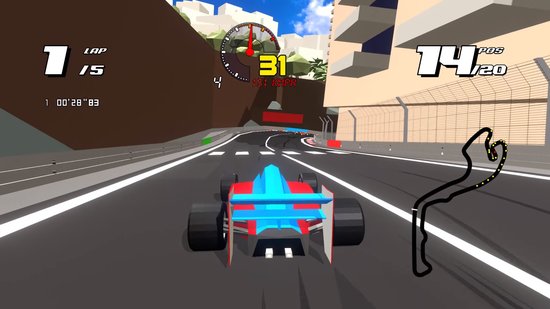 The racing mechanics of Formula Racing Retro are incredibly like an arcade game which makes sense. A good racing line will help but it’s not required on the lower difficulty levels. Where the developers killed it is with the crash physics. I mean it in the nicest and best way possible but when you bump into another car it’s anyone’s guess what’s going to happen. It can be a complete goofball and ruin a run which is extremely retro. If you get rammed hard from behind you’re probably going to blow up which is unpleasant. Or if a car hits you from the side you’ll probably go flying off the track. It’s best not to hit any of the cars but I think super weird physics is key to a good retro game. 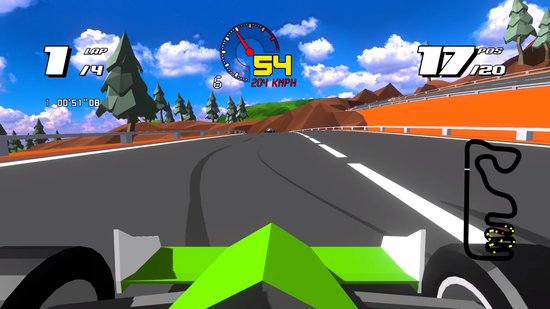 Otherwise, the car handling is tight and I like it. You get a little wheel squeal when you narrowly make it around turns without braking. They added drafting which is great and rewards risky driving. It helps boost you around those cars a little bit. But how long do you stick behind them and then try and squeak by? The longer you wait the closer you have to drive to them and the more dangerous it is. Remember those weird physics. 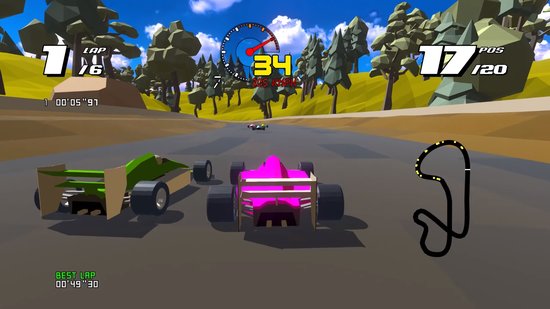 Now the eight tracks range from plain ovals to crazy turns. With the Monte Carlo track being the most difficult to race on with other vehicles. The road is so narrow it’s impossible to pass anyone. This isn’t a negative because all the tracks bring something different and I welcome the challenge. With the curvy tracks, a little memorization will help since you’ll need to know which turns to brake on. 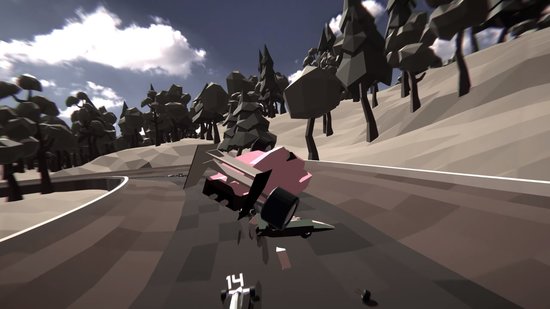 There are two different modes to choose from. You can pick either arcade or elimination. Arcade is what you expect it to be. But while you’re trying to come in the first place you’re also under the gun of the timer. You best hit those checkpoints if you want to keep the race going. Absolutely a borrowed mechanic from VirtuaRacing. The biggest factor for making the checkpoints is the difficultly level. On beginner, it’s pretty easy to make it around the track and you can make a few mistakes, even crashing a couple of times. On expert, you better have a perfect racing line and one mistake means not making the next checkpoint. Even keeping the car at top speed isn’t enough. On the oval tracks, I can keep the gas pedal to the floor the whole time and I still won’t make it around fast enough. The developer assures me it’s possible, and I believe them. If you’re looking for a challenge then the expert difficultly has you covered. 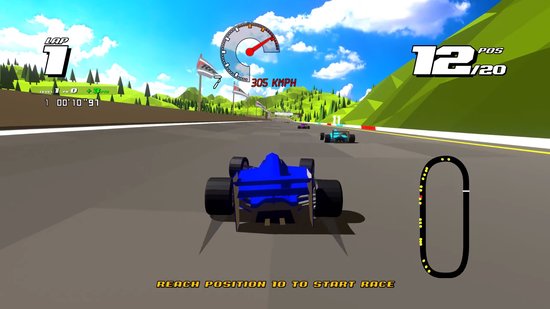 Moving on to the elimination mode which is different from what I expected. Normally an elimination mode would remove the driver in last from the race each lap. Instead in Formula Racing Retro, you need to stay above the tenth place. If you drop below tenth and complete a lap it’s game over. For each lap you complete you gain a point. This is much more difficult than it sounds since the other drivers get faster and faster the more laps you finish. By lap eighteen it feels like they’re so much faster than you there’s almost no way to win. Oh, you want to block them from passing you? Remember those weird physics? Getting hit from behind will literally make your car explode into a million pieces. Perhaps with a better racing line, you can get even more ahead in the beginning and last even longer. Good luck! 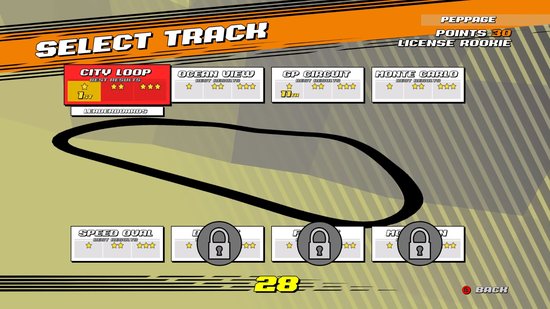 Anyway, you do need to complete races to collect points in order to unlock the three locked tracks. It wasn’t that much of a struggle though. It’s too bad that the stock and prototype cars, from the 32x version of Virtua Racing, were not included as unlockables. Once you play through all the levels the only thing to do next is to try and complete them on all three difficulties. There will be some learning the tracks before you’re really good. Then after that Formula Racing Retro has online leaderboards if that’s where you want to test your skills. It’s always a nice addition, especially ina racing game. I don’t know about the global points for everything though. It’s not a clear gauge of skill. It’s impossible to tell if someone finished all the races or was able to last a long time in elimination. 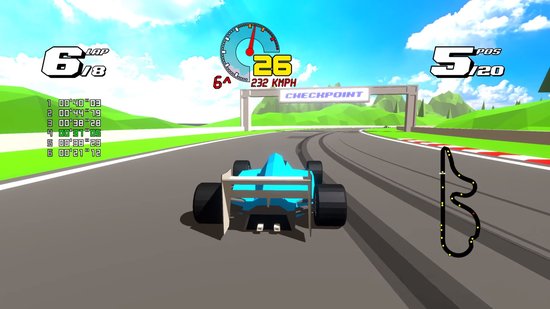 One final thing, if you’re going to get the best speed on the tracks then you’ll need to master manual transmission. The car shifts fine by itself but the manual transmission has a greater top speed to make up for all that extra work. I remember spending a ton of time learning the tracks and also memorizing what gear I need to drop down to for each turn. The manual transmission is a little funky though. If you’re not in the right gear than the car will actually slow down. I’ve driven a stick shift before and it doesn’t work like that. It’s ruined a few races for me. Especially when you hit a part of the road and the car slows down but you’re not ready to downshift. Still, I love that Formula Racing Retro has that extra difficulty for the player that wants to go manual.

Overall, Formula Racing Retro is fun, especially if you want to take a trip down memory lane. I liked the new features and physics are perfectly wild. I believe Formula Racing Retro to be close enough to Virtua Racing that it throws me right back to my childhood. If you need a dose of nostalgia then I recommend it. 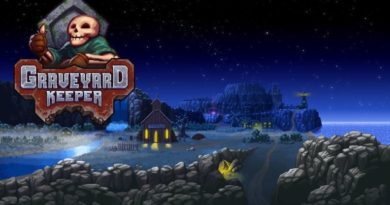 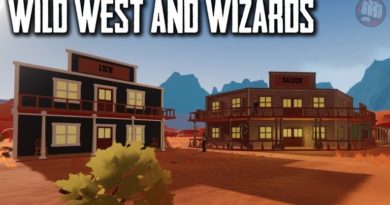 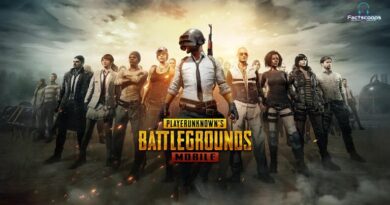